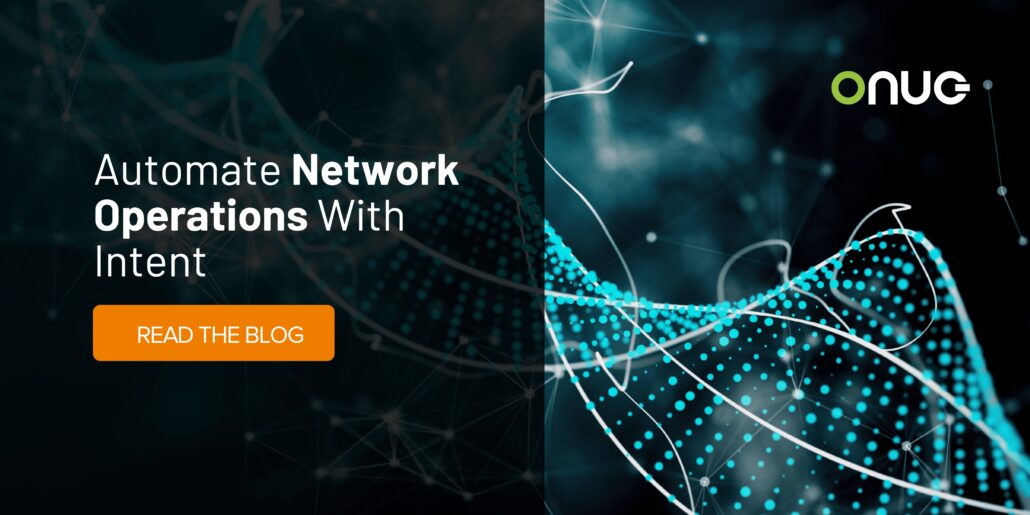 by Nolan Greene and Chris Villemez

One of the limitations of intent-based networking systems (IBNS) is that these technologies focus on Day 0/1 network operations – deployment, configuration, and other tasks involved with the building and rollout of new networks. But what about intent for Day 2 operations? What could it mean for the enterprise if network intent technology could be applied to ongoing maintenance tasks and the resolution of tickets?

Before getting into that, it would probably be helpful to discuss just what we mean by “network intent”.

Networks are Collections of Intents

And the above is great for making sure networks are deployed correctly and optimally on Day 1. However, networks are comprised of a vast array of types of infrastructure, vendors, and protocols and are impacted by myriad internal and external forces. Using network intent to optimize the full enterprise network lifecycle requires a different approach.

Applying the IBN paradigm to full network infrastructure lifecycle is the logical evolution needed to empower IT teams to future-proof their operations. Intent-based automation (IBA) allows network operations teams to increase the autonomy of their infrastructures, allowing for faster resolution of service impacts, with increasing levels of automation throughout the network lifecycle. These intent-based operations approach drives networks closer to that lofty goal of being self-healing. What makes IBA different from other forms of intent-based networking is its ability to pull in contextual, real-time data from the network’s day-to-day operations to continually validate and verify that the network is functioning according to plan.

Like any data-based automation, IBA requires constant access to real-time data sources on how the network is performing. Ideally, this involves a network operations platform that can provide insights based on historic, baseline, and current information about how the network is behaving. Further, the automation system must be able to execute rapid scale diagnostic checks against those key aspects of the network that enable good performing applications — reachability, resiliency, performance, and security.

These things combine to provide an intent-based operations approach that can catch network behaviors going awry prior to becoming a bigger problem.

How does it work?

Intents ride on top of infrastructure, offering an end-to-end perspective of “how do I get my application from Point A to Point B and performing well”. But individual outcomes, these are device by device, software feature by software feature. For example, we may have the goal of directing traffic to the Internet via one of two redundant service partners, but to accomplish this we would have configured BGP routing on my edge devices. We may have configured performance controls such as MTU or QoS. We’ll have security policies configured to secure the device and network. And similar controls would have been applied to neighboring devices and so on.

We are therefore required to see the network in two, but combined, ways – first, a contextual view of the network, such as a node-by-node end-to-end application path; and second, a per-device view, to know that each device individually has its application affecting features properly configured and healthy.

Once we have an array of device-level outcomes to validate, we have the necessary elements to feed into a loop of continual assurance. The validating and reporting of these key network characteristics, those things that need a specific configuration, that need to be in the correct operating state, informs network operators of a specific failure of function.

Rather than relying on residual problem symptom alerts, instead, we monitor for those core aspects that allow my application to perform well. This proactive approach to diagnostic automation with a focus on network design and function can enable teams to halt developing problems before they become huge outages.

At the end of the day, IBA is scaling what network operations teams already do- collect and analyze data, investigate and diagnose network problems, and monitor and validate that the network is achieving the outcomes it has been built to achieve. By decoding infrastructure complexities to measure and validate the inner workings of the network’s services, IBA sets network operations on a path to automation that scales for every person, every network (no matter what it’s made of), and every task (no matter how complex).

To learn more about how NetBrain supports Intent-Based Automation, visit our website at www.netbraintech.com and sign up for our upcoming webinar with ONUG, Improving Network Operations with Intent: Proactive Automation that Drives Results, on June 23 at 11:00 AM EST.

Nolan Greene is a Sr. Marketing Manager and Chris Villemez is a Sr. Technical Marketing Engineer at NetBrain.