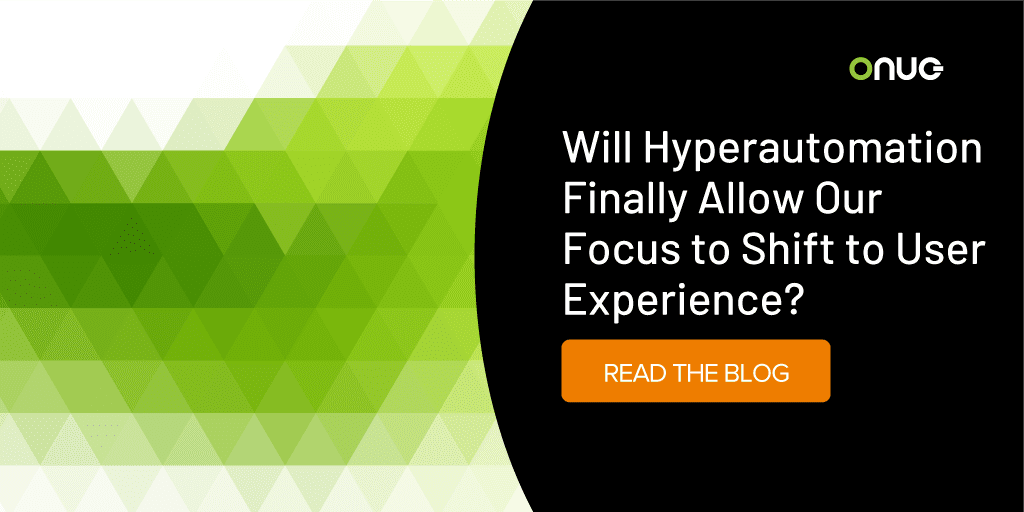 Will Hyperautomation finally allow our focus to shift to user experience?

Hyperautomation is not a hype term coined to capture what everyone has already been doing for some time – automating everything they can. Not a new term, but it’s gained more attention as of late as industry voices rally around it, making what was old relevant again. It’s as if the world suddenly woke up with the realization that operational processes are tedious, and maybe we should find a way to automate it all.  With more automation than ever before.  The solution to our operational inefficiencies and spotty user experience has finally been found!

Forgive me if I sound cynical; I’ve been working with customers struggling to automate operational processes reliably and safely for many years. If there were an “Automate All” button, everything would have been hyper-automated long ago. In all fairness, conventional network and network security operations were never built to write code, only configure. DevOps effectively ended the “Salad Days” of infrastructure. Automated and accelerated delivery via code extended into various other functions; you can simply add an “Ops” to any functional silo. The infrastructure CLI jockeys now had to retrain on Python, Ansible, Puppet, Chef, YAML, etc. Some enjoyed the challenge of something new, and others were less receptive after decades of domain mastery and hard-earned certifications. However, progress in the face of shrinking infrastructure budgets definitely does not wait.

Public cloud utilization had been on a steady uptick leading up to 2020 and post-2020; it is now a critical component of organizational strategy. Infrastructure’s shift from conventional management to NetOps and NetSecOps now included a shift from hybrid cloud to multicloud. Disruption and complexity have become the norm with a substantial cost: keeping the lights on has removed much of the focus from desired outcomes. Productivity may suffer, but an outage presents a more significant risk to the business and the people managing the network – it’s hard to assign blame for poor experience, but an outage lives forever. Given the complexity of creating a network in every public cloud to stitch them all together, it is not a difficult choice to make – just make it work.

“Just make it work” is the scenario for which automation was built. Offloading the basic stuff creates time for more impactful work to be done. For multicloud networks, automating the creation of intra and inter-cloud connectivity is a table stakes requirement. This goes beyond policy automation, and it requires cloud-specific, cloud-native orchestration.  Expanding your public cloud presence incurs extensive expertise requirements for operations teams which is its own unique distraction for an organization. Automating the orchestration of cloud-native network functions can alleviate concerns around Ops churn while speeding the delivery of the multicloud network. Once this has been achieved, there is now time to address higher-order items like network quality and user experience.

If we include AI, Hyperautomation begins to carry more taxonomic weight than “automation” alone, yet I feel this only moves the goal posts further for many organizations: if IT does not create but only supports value creation, can your organization justify hiring highly skilled developers to author AI-enhanced automation? Build is largely out of the question leaving “buy” as the only option. Acquiring an external solution remains the best way for most organizations to quickly achieve Hyperautomation in multicloud environments while avoiding the high costs and technical debt that often accompanies home-grown solutions.

It is possible to achieve an intelligent multicloud transit that proactively optimizes itself and automatically heals without manual intervention. Your network should tell you how to boost performance or save money, allowing you to focus on the things that really matter – driving productivity and creating competitive advantage. Automation should not mean crossed fingers and bated breaths; automation plus AI should operate consistently and autonomously, freeing up operations teams to address more pressing issues than just making it work.  Is this Hyperautomation? Maybe. Maybe it’s just how things were always supposed to work. Ridley Scott’s Blade Runner envisioned us all in flying cars by now.

We’re not quite there yet, but the multicloud network and Hyperautomation certainly is.