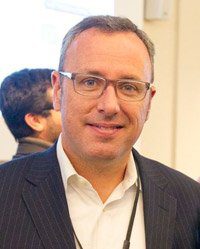 Michael Payne leads the Network Strategy team for the Global Network Services organization at JPMorgan Chase. In this role, he evaluates emerging technologies and companies in the software defined networking, network virtualization, data center and cloud networking and unified communication areas. He works closely with teams in the Investment Bank and Chief Information Office in driving the innovation agenda within JPMorgan Chase.

Prior to JPMorgan Chase, Mr. Payne joined Cisco Systems in 2000 to develop financial services solutions for the Asia Pacific region. He transitioned to the U.S. market in early 2003 and assumed global responsibility in 2004 as the Financial Services Segment Executive for global industry solutions in Worldwide Enterprise Marketing.

Before joining Cisco, he was a manager in Andersen Consulting’s Internet and Media Technologies practice. During his five years with Andersen Consulting (now known as Accenture), Mr. Payne developed and implemented several Internet and e-commerce systems for large global financial institutions in Australia, Singapore, and Malaysia.

He has a bachelor’s degree in business majoring in marketing from the University of Technology in Sydney, Australia. Mr. Payne is based in California, United States.