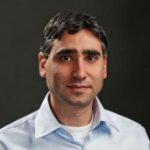 Martin Casado is a VMware Fellow, and Senior Vice President and General Manager, Networking and Security Business Unit at VMware. He joined VMware in 2012, when the company acquired Nicira, of which he was co-founder and Chief Technology Officer.

Martin received his PhD from Stanford University in 2007 where his dissertation work led to the creation of the software-defined networking (SDN) movement, and laid the foundation for the new paradigm of network virtualization. He received his Masters from Stanford University in 2005. While at Stanford, Martin co-founded Illuminics Systems, an IP analytics company, which was acquired by Quova Inc. in 2006.

Prior to attending Stanford, Martin held a research position at Lawrence Livermore National Laboratory where he worked on network security in the information operations assurance center (IOAC). Martin has been recognized as one of the industry’s leading innovators, and has been featured as one of Business Insider’s “50 Most Powerful People in Enterprise Tech,” Forbes’ “Next Gen Innovators,” and Silicon Valley’s Business Journal’s “Silicon Valley 40 Under 40.” In 2013, Martin was also honored with the Grace Murray Hopper Award as Outstanding Young Computer Professional of the Year.