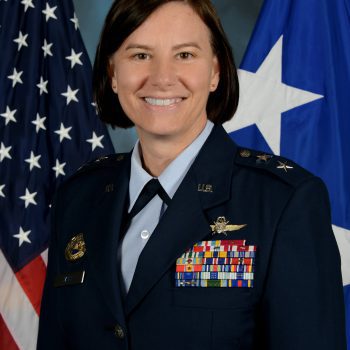 Air Force Major General Sarah E. Zabel is the Vice Director of the Defense Information Systems Agency (DISA). In this role, she helps to lead a global organization of military, civilian, and contract personnel who plan, develop, deliver, and operate joint, interoperable, command and control capabilities and a global enterprise infrastructure in direct support of the President, Secretary of Defense, Joint Chiefs of Staff, Combatant Commanders, Department of Defense components, and other mission partners across the full spectrum of operations.

She has served within the communications and cyber field as the 43rd Communications Squadron commander at Pope Air Force Base, North Carolina, a computer security evaluator at the National Security Agency, a computer and network programmer, an Air Force Academy instructor, and as a staff officer at two combatant commands, the Joint Staff, and the Air Staff. She has commanded at the squadron, group and wing levels.

Prior to her current assignment, Maj Gen Zabel was the Director, Cyberspace Strategy and Policy, Office of Information Dominance and Chief Information Officer, Office of the Secretary of the Air Force.